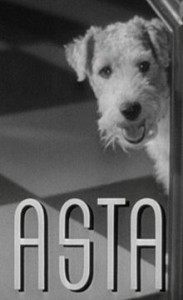 Just about anyone who owns a Wire is familiar with the “Thin Man” movie series and its canine star, Asta. But ATRA has its own star and the story is found in the book, “Broadways Tails,” by Bill Berloni and Jim Hanrahan. Chapter 11, entitled, “Outfoxed'” is about Riley, an ATRA rescue who was chosen to play Asta in a Broadway production called “Nick and Nora,” based on the characters in the “Thin Man.” Mr.Berloni, the trainer, writes, “My search began immediately. Wirehaired fox terriers, which are sometimes called ‘Asta’ dogs, are small white dogs with curly hair and very expressive faces. They were bred to be fast enough to chase foxes and intelligent enough to outsmart them. Past experiences with terriers made me worry about the last trait. Terriers in general are hard to train because of their independent nature, but there are certain breeds of terriers that are so independent, they are impossible to train for this type of work.  I was afraid that wirehaired terriers fell into this category.” He wanted a shelter dog, so back in 1987, he was referred to ATRA. And while there are different dogs now, of course, some things don’t change! Mr. Berloni writes, “There were terriers everywhere! It sounded like a battle zone when all those dogs started barking–I owned ten dogs at the time and even I was taken aback.” He chose Riley– so named because Ruth said he was living the life of Riley compared to wandering the streets of Los Angeles. He was an escape artist and did whatever he pleased. It was a wonder he chose Riley since Riley both frustrated and amused Ruth by the way he continually “oufoxed” her. On the drive home, Riley had to be crated and he barked and growled the entire 10 hour drive to Tucson. “I thought he was upset about leaving the ranch, but I finally decided he was just plain angry he wasn’t driving,” writes Berloni. He goes on to document the challenges of training and some hilarious rehearsals, and they get to opening night. But opening night was also closing night. Riley received the best reviews….but of course!