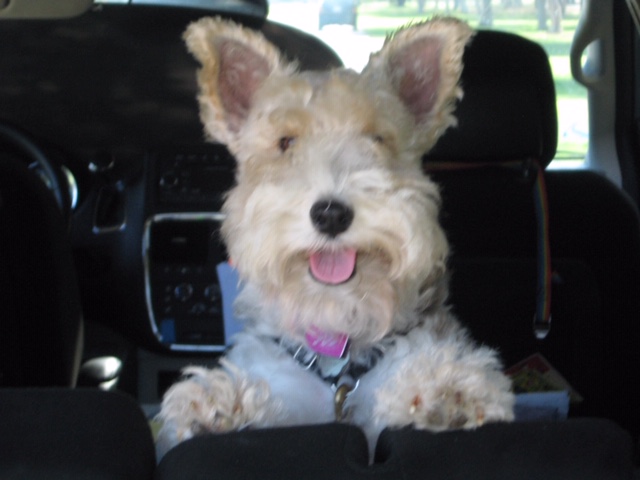 Skyler was rescued from a Korean puppy mill where she was neglected, underfed and bred at a very young age. She weighed only nine pounds when she arrived after her long flight from Seoul. Now, though, we have had to place Skyler on a diet! Skyler just turned four years old in September 2019, and has blossomed into a beautiful and sweet though tiny Wire Fox terrier. She loves to play with her toys but has trouble deciding which one sometimes. Skyler is still fearful in some situations. Since she was confined to a cage indoors, Skyler is still familiarizing herself with the outdoors. For quite some time, Skyler refused to walk on leash. Now she is much improved and does not “put on the brakes” quite so often. She has a cute “Charlie Chaplin” walk but really likes riding in cars better it seems!

Housebreaking has been (and still is) a difficult challenge because of her confinement. She learned to “hold it” as long as possible so as not to soil her crate. But since she eventually had to go, she went in her crate. She needed to unlearn that behavior, overcome her intimidation of being outside, and discover where to go. She is a clever little girl, and doing her best, but is not quite “there” yet.

Skyler has found her voice, for sure. People walking by with dogs, or coming to the door, especially the mailman, get to hear her but they can’t see her doing excited circle spinning as she waits to see if someone will come through the door. She isn’t the best TV watching companion as there are a lot of things on TV that she feels deserve a growl or a bark. But when she decides all is safe, she will curl beside you and snuggle and often snore!

Skyler has been good with other dogs. She is not aggressive at all. Our preference, however, is for Skyler to be an “only” dog. Although she is sweet, she is in need of a lot of attention and if there is another dog in the picture, she is quite assertive about horning in and wanting you all to herself. However, it would be good for her to meet up with another canine friend as she actually seems to be more encouraged to walk when there is another dog with her. Still, though, despite watching others, she does not relieve herself while on a walk yet.

Unlike most terriers, Skyler is not highly energetic. What Skyler likes best of all is to be right next to you getting lots of attention, playing a bit with her favorite stuffed animals, having a chew on a bully stick (especially a stolen one) a ride in the car or snoozing away. And oh my does she like her meals and her treats. That’s why she is now on a diet!

Skyler has been very healthy. We had her completely x-rayed to make sure there was no orthopedic reason for her not wanting to go on walks, but everything was fine. She is just fine at the vets. She loves the attention and she gets quite a bit of it there!